A film about my book "Elbe - Longing at the waterfront" was shot which followed the boat tour described in the book.

Hamburg. The starting point were the St. Pauli landing bridges, Altona, then along the edge of the harbor, combined with a break at the museum harbor Neumühlen / Övelgönne and back again.

The documentary about my book "Elbe - Longing at the waterfront", filmed by the German NDR TV station, during the show
__ "Nordtour", November 16th 2013 + January 4th 2014 at 6 pm,
the NDR TV station which is nationally available. 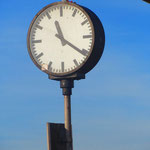 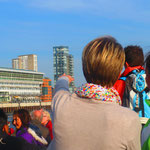 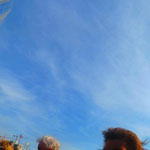 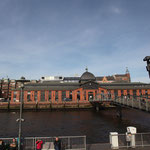 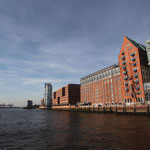 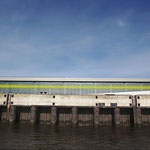 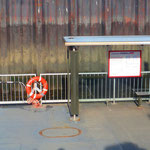 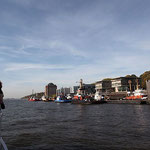 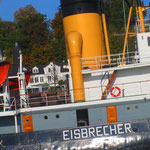 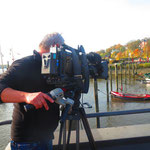 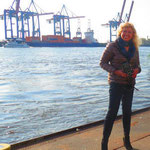 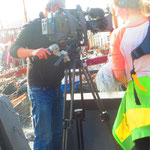 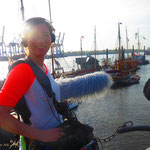 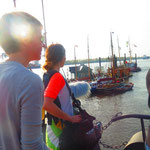 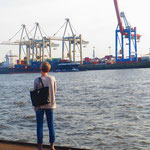 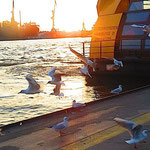 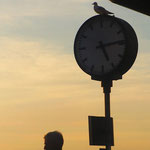 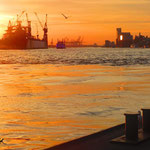 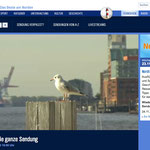 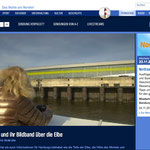 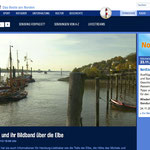 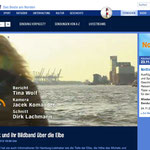 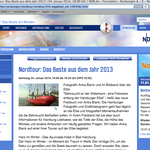 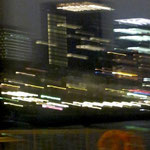 From above, from left to right:

1.  Starting point: Ferry terminal station _Landungsbrücken_ In the background on the right side, the striking "Gorch-Fock-house" above the fish market.

2.  NDR film crew. By ferry along the waterfront. On the way to the museum harbor "Neumühlen/Övelgönne".
3.  _The sky above Hamburg_ In the background the Elbe Philharmonic Hall which is currently under construction.
4.  TV shooting ... With the ferry past the ferry terminal "Altona Fischmarkt" with the legendary Fish auction hall. Built in 1896, it has become an event hall since its restoration in 1984.
5.  With the ferry past the Altona harbor edge. With view to the office buildings "Holzhafen". In the background the shiny Twintower, the residential building "Kristall".
6.  _green/blue in October_ With the ferry past the cruise terminal Altona. The terminal provides a berth for ships with a length of up to 326 m and with a water depth of 10 m.
7.  _Hello Elbe_ Self portrait. With the ferry past the ferry terminal "Dockland / Fischereihafen" with the imposing building "Dockland", an office building made of glass and steel which juts over the water like a ship.
8.  On the way to the next ferry station "Neumühlen/Övelgönne" is the western part of Hamburg's "string of pearls". View at starboard / rechts.
9.  _Stettin Eisbrecher_ it was commissioned as the largest icebreaker in 1933. Since 1981, it has been recognized as a technical monument and it is currently moored in the Museum harbor "Neumühlen / Övelgönne".

10.  NDR TV shooting at the museum harbor Hamburg. The museum harbor Övelgönne is right next to the wharf and is a resting place for museum and historic ships.
11.  Anka Blank at the ferry terminal "Neumühlen/Övelgönne".

The St. Pauli Landing Stages are located in Hamburg's St. Pauli district between

Lower harbor and fish market directly on the banks of the river Elbe. They are a centrally located transport hub.
18.  _Sound of water_ Ferry terminal station _Landungsbrücken_ The 688 m long jetty was constructed in 1907 and it originally was used as a mooring place for overseas passenger ships.
19.  _Flight into the night_ The end of a beautiful day. St. Pauli Landing Stages with view to the opposite river bank with the company grounds of the "Blom+Voss" shipyard.
20.  Film "Nordtour" on NDR, November 16th, 2013.
21. - 25.  Film "Nordtour" on NDR, November 16th, 2013 + January 4th, 2014.

__Since 2015 the NDR TV “Nordtour-Film” about my book “Elbe – Longing at the waterfront”, you can’t it find anymore in the NDR Mediathek. If you want to watch the movie again, you can contact me.

/ You have the possibility to order the whole tv show "Nordtour - The best of 2013" as a dvd or vhs on NDR email.

"Sehnsucht an der Waterkant - Loning at the waterfront"